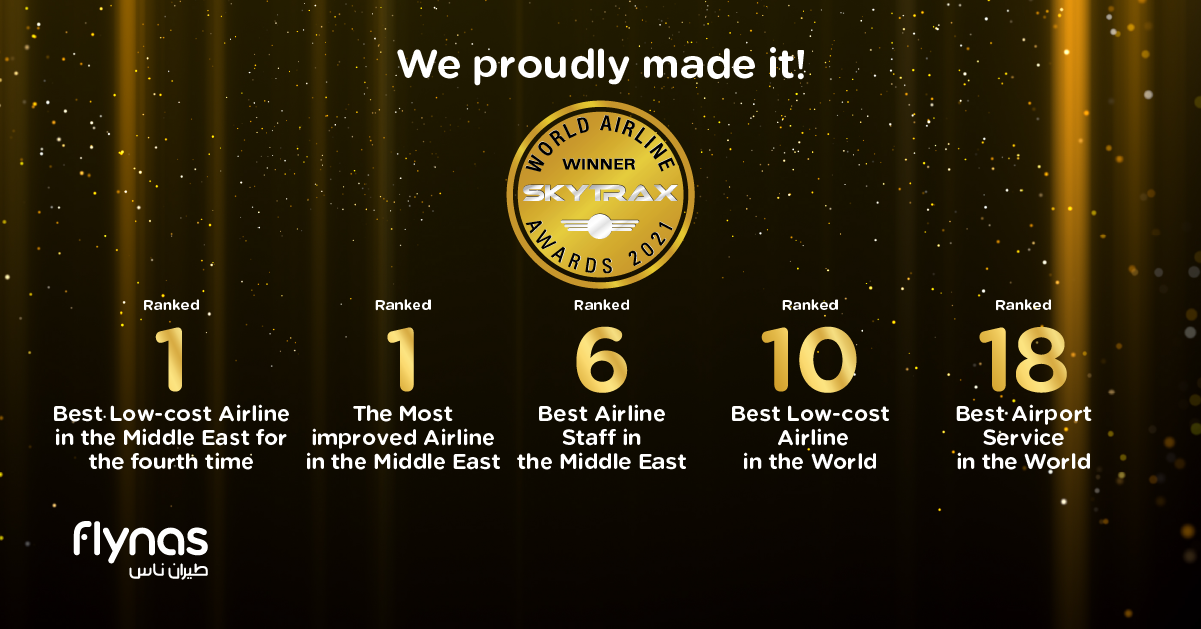 Commenting on the accolades, Mr. Bander Al-Mohanna, flynas’ CEO, stated, “We are proud to be adding another national achievement to the great accomplishments of our beloved kingdom in the aviation sector. Earning these awards reaffirms flynas’ position at the forefront of the regional low-cost aviation sector and highlights flynas team’s diligent efforts and their contributions to the sector’s development and excellence.”

Mr. Al-Mohanna indicated, “The new awards will be added to the remarkable list of accolades flynas has received in recognition of its unique services and the competence of its professional staff, which have enabled the company to serve the goals of Saudi Vision 2030. We are constantly working to add new destinations that meet our passengers’ travel needs, create new markets, provide competitive options, and offer an opportunity to learn about multiple cultures. In parallel, we constantly work to advance our facilities and services, to fulfill our ultimate goal of attaining a high customer satisfaction rate.”

Mr. Al-Mohanna emphasized that winning the Most Improved Airline in the Middle East award, which reflects an airline's quality improvement, indicates flynas’ advanced services level, endorses the brand’s position, and demonstrates its tireless efforts to improve its services and develop its work environment to continue to underline new achievements.”

It is worth noting that flynas welcomed its 20th Airbus A320neo airliner in July as part of its SAR 32-billion-deal with Airbus in 2017 to purchase 120 A320neo aircraft. The fleet expansion will allow flynas to bring its guests a world-class travel experience and enhance its capacity to accommodate the growing demand and fulfill its geographic expansion strategy.

The “Skytrax” award is a global standard for excellence amongst airlines and the world’s largest, annual airline passenger satisfaction survey. The winners are selected based on votes and surveys conducted by Skytrax over a 10-month period to rate quality and standards across 41 key performance indicators related to services and products offered by airlines. These awards will be added to flynas’ record of achievements and awards, including the IATA Operational Safety Audit (IOSA) certificate, which is an internationally accepted evaluation process of an airline’s operational management and control systems and its commitment to the highest safety standards, and the Middle East’s Leading Low-Cost Airline Award from World Travel Awards for six consecutive years.