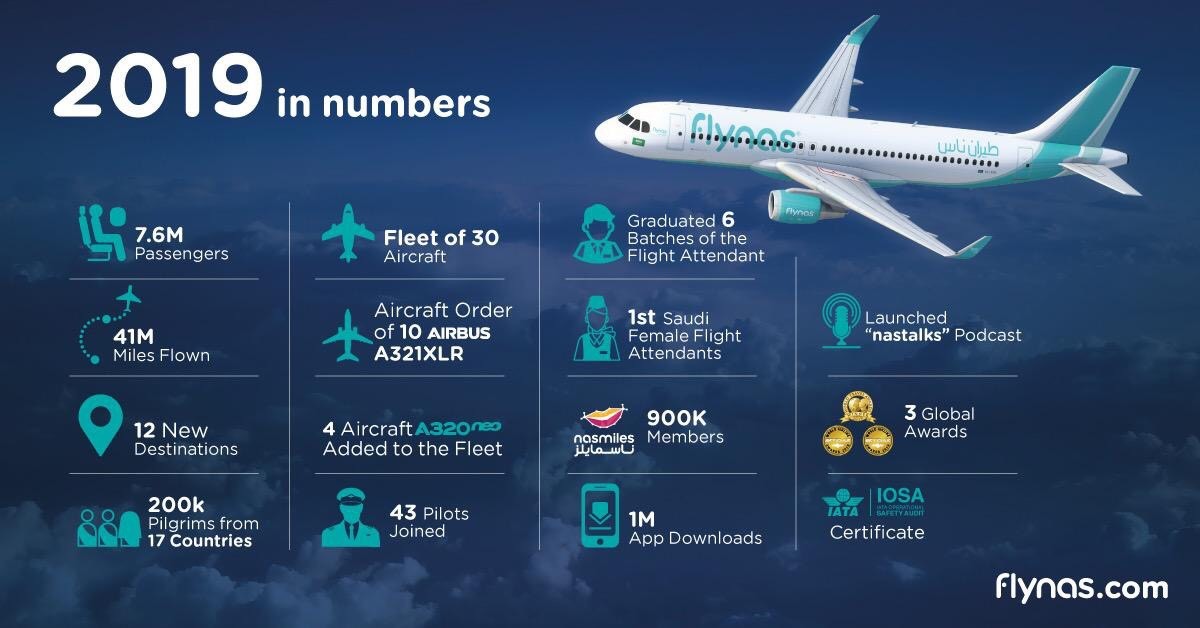 flynas, the Saudi national air carrier and leading low-cost airline in the Middle East, has added a series of achievements in 2019 confirming its leading position in the regional low-cost aviation sector. Throughout the year flynas pursued its efforts to develop its fleet and expand its operations towards farther destinations and new markets, while continuing to offer the best services at competitive prices. This was directly echoed through the number of travelers, which posted a steady year-on-year growth of 15%.

Almohanna recapped flynas’ accomplishments that highlight its commitment to its expansion strategy and ambitious medium and long-term plans. He praised the MoU signed in June with Airbus to purchase 10 of the latest A321XL aircraft with a total value of 9 billion SAR. He also indicated that to date flynas has received four airliners from the 2017 mega-deal with Airbus to purchase 120 A320neo aircraft for a value of 32 billion SAR - the second largest aircraft purchase deal in the Middle East.

During 2019, flynas avidly pursued its geographic expansion strategy. Almohanna pointed out that the carrier announced the launch of several new and direct destinations, particularly between Riyadh and New Delhi. flynas also launched new flights to the Indian cities of Lucknow and Calicut, bringing the number of destinations in India to four, after New Delhi and Hyderabad. flynas plans to tap new international destinations including Lahore, Islamabad, Sarajevo, Vienna, Batumi, Tbilisi, and Baku, among others.

At the end of 2019, flynas signed a strategic partnership with Saudi Ground Services to provide ground handling services in all the Kingdom's 28 airports for five years.

Almohanna also voiced pride in flynas being honored as the Middle East’s Leading Low-Cost Airline by World Travel Awards for the fifth year in a row, and for earning the Skytrax Award for Middle East’s Best Low-Cost Airline for the third consecutive year and the Best Airline Staff award for 2019. He added that these accolades confirm flynas’ consistent dedication to provide the best services at the most convenient prices, and its commitment to the flight schedules, and the quality of services provided to its guests.

flynas is Saudi Arabia’s leading low-cost carrier, operating more than 1200 weekly flights to 35 domestic and international destinations on its fleet of 30 aircraft.